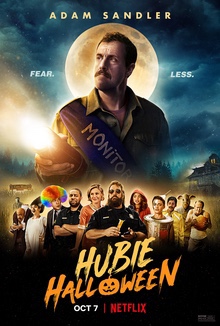 Salem needed a hero, and his name was Hubie! Something was weird happening, which did not escape the eyes and ears of the town’s famous deli worker, Hubie. He was going to save Halloween…

1) bullying: Because Hubie was different from his peers, he was made fun of all this life. Even the children imitated the adults by throwing things at Hubie as he rode his bicycle…

It was horrible how almost everyone was making fun of him. They were cruel even though he continued to be a caring citizen.

2) to be true to yourself: Nothing could change how Hubie talked and acted to his surroundings. He stayed true to his beliefs no matter how much others laughed and ridiculed him.

Sometimes, it’s the lack of self-esteem that caused those bullies to single out the one person who was brave enough to be himself.

In my opinion, this is not a scary, horror movie. There are some scenes that require parental guidance. Also, some may find that Hubie could be a bit too “slow” for their liking. But, I liked how the two themes kept resurfacing throughout the movie till the end.

Note: This movie was dedicated to Cameron Boyce, who was supposed to be one of the characters in this film.